He went bouncing around from branch to branch, hanging and swinging; smiling and frowning; squealing and yelping. He looked at his mother with innocence in the eyes, and mischief in the smile. She frowned at him and hid him in her lap. We waited for a glimpse of the baby. He peeped out of the lap right when he got the chance, as the mother heard a call — the alarm call of an acquaintance perhaps — and her attention was drawn to the possible threat.

The driver asked for my permission to park the vehicle on the next turn, anticipating a Tiger movement whereas I was waiting for the baby to peep out again. 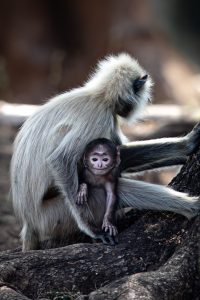 Langurs stick together in groups called ‘troops’ consisting of one male and a few females. They make various sounds like harsh and cough barks, rumble screams, grunts, honks and hiccups to communicate depending upon the message to be conveyed as and when required.
The babies stick to their mothers until 13 to 20 months. They are extremely interactive and inquisitive, like all young ones in the wild.

To the one we encountered, a big camera lens was an unusually attractive object, which is why he kept trying to have a look at it repeatedly, peeping out of the lap of her mother whenever he could. He would keep looking at the camera and call out to her mother whenever I lifted it. The mother would pull him back into her lap, and this sequence kept playing out until another jeep stopped by to tell us about a remarkable Tiger encounter they had had on the very next turn of the road we had stopped on.

Prev Emergence
Next How to Start Wildlife Photography? 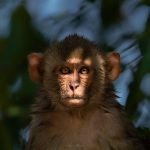